A True Partner, Not Just a Vendor: Bank of Zachary President and CEO Discusses Partnership Success with Teslar Software 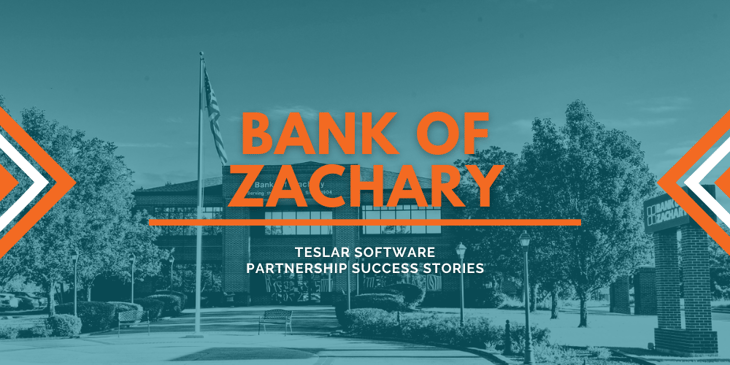 During the 2019 ICBA ThinkTECH accelerator, Mark Marionneaux, president and CEO of Zachary, La.-based Bank of Zachary, visited the Venture Center and spoke with several participants, one of whom was Joe Ehrhardt, CEO and founder of Teslar Software. Bank of Zachary has since partnered with Teslar Software for exceptions management and workflow tools to streamline manual processes.

What makes Teslar stand out in a crowded marketplace?

“I’ve always felt like the loan side of the bank has more complications and complexities, so you’ve got many different vendors trying to compete for portions of that space,” Marionneaux explains. The bank gets a lot of vendors trying to sell lending products, but they needed a solution for more than just lending. For this reason, Teslar stood out among competitors.

Bank of Zachary wanted a solution to aid in communication between front and back operations, to increase transparency, and to create workflows. Exceptions and loan file maintenances were emailed, and the bank used a combination of spreadsheets, the core, and their doc management system to house tracking. To combat this, Marionneaux began looking for a solution that could house all of this information in one central location and ultimately decided on Teslar, which offers solutions not only for lending, but for workflow, portfolio management, and many other areas as well.

In a marketplace with ample quality offerings, many factors go into the decision process. For Bank of Zachary, Teslar Software’s company culture also came into play in the bank’s decision. “The Teslar team is really willing to collaborate with us. They do not just put us in a box and tell us how to use Teslar, but sit down and work through our problems together, and that was a big factor for us,” Marionneaux explains. “Teslar feels like a true partner and not just a vendor.”

Marionneaux mentions that when he presented Teslar to the back-office staff, he told them that the person who developed the platform worked in the same role they did and that really resonated. Many similar products are designed and developed by engineers and programmers who don’t understand the banking world and therefore don’t quite understand the pain points for which they’re solving. However, Teslar was developed by a banker, and still today nearly half of Teslar Software employees are former bankers.

Since implementing Teslar, bank leadership is challenging team members to find better, more efficient ways to accomplish their tasks by asking, “Is this something we can do in Teslar?”

Bank of Zachary is also enjoying the accountability that Teslar brings. With Teslar, bankers can be held accountable for many tasks that the bank previously did not have as much visibility to.

Banking amidst a pandemic

Bank of Zachary’s partnership with Teslar was in its early stages when pandemic shutdowns began in March 2020. With lenders and many other staff working outside of the office for several months, the platform has been instrumental in their success throughout the pandemic.

When preparing for a post-pandemic economy, while there are indefinite unknowns, one thing the bank is planning for is tighter margins and believes a system that helps you accomplish more with the same revenue is essential. “We’re looking at a future where we have to be innovative in how we attack problems and not just add more staff to the problem. Our margins aren’t going to be the same and we’re not going to have this extra revenue generation to support that kind of operations.”

Of the post-pandemic future, Marionneaux also says, “We don’t know the unintended consequences yet, but I feel like an organization that’s as efficient as possible is going to be able to survive. I think we’ve got a head start with Teslar.”

Discover how Teslar can make your community bank as efficient as possible—schedule your private demo today, where we can discuss your institution’s specific needs and see how Teslar can solve them!

To see more about Teslar Software’s partnership with Bank of Zachary, check out this article from Global Banking & Finance Review.